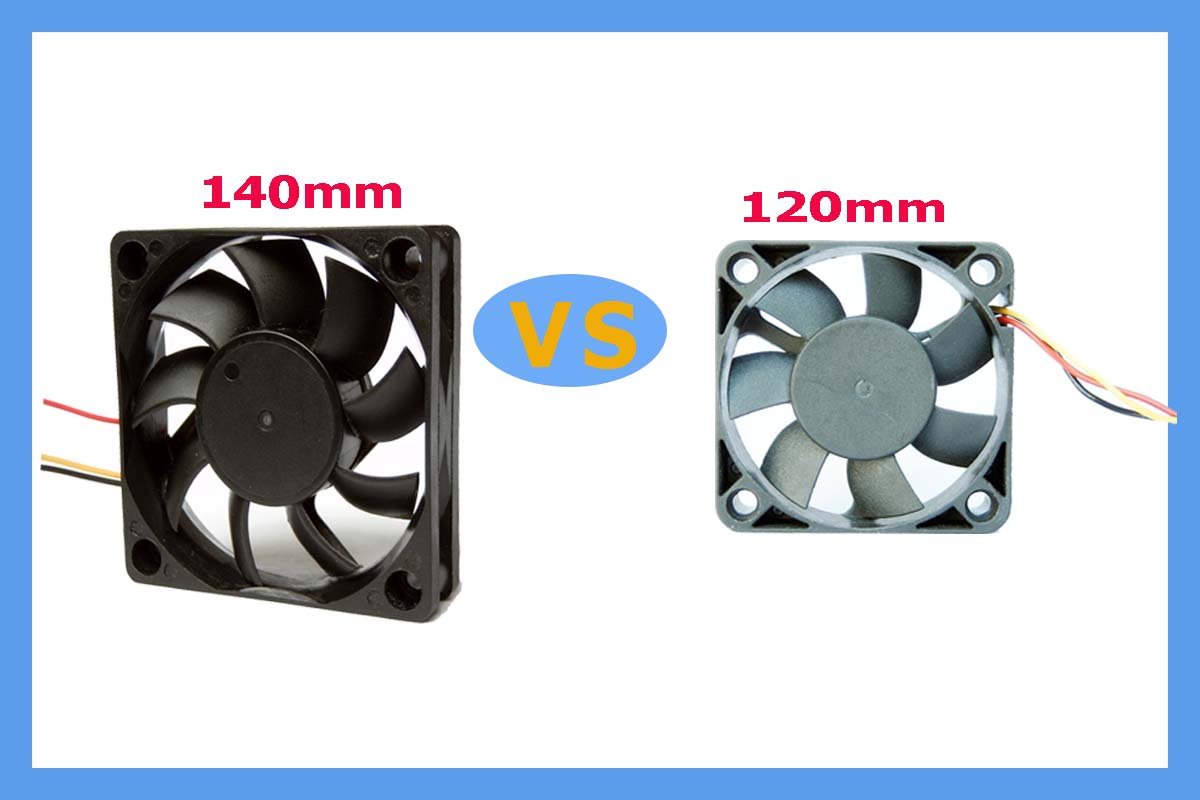 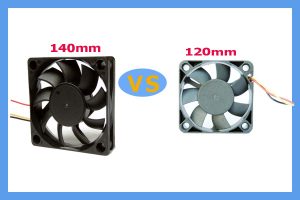 The 120mm vs 140mm fans comparison you have been waiting for is here. We took the liberty of comparing both fans so you can have the best at your feet without breaking a sweat.

Every PC deserves the best fans. With such, you’re sure of getting increased spinning speeds, allowing your PC to work smoother even under heavy load without heat snag.

Overheating can damage or make sitting next to a PC uncomfortable. So, if you use your PC for gaming or intensive jobs, choose the best computer fan to ensure improved performance.

There are tons of case fans out there, with varied price points, airflow, spin speeds and noise levels. As a result, choosing the right product might be a bit confusing.

However, this 120mm vs 140mm case fan comparison will point you to the right products.

Here’s a table showing the features of the 120mm and the 140mm fans. Let’s run through it quickly before we dive deeper into the comparison.

So, now is the time to visit each feature and find out who the most superior PC fan is. Our goal in this 120 vs 140mm fan comparison is to show you the model that wins in each section.

Are you ready? Let’s dive in.

The CPU generates heat while working. Therefore, if you don’t want to feel like you’re close to a microwave oven while operating your PC, choose a fan with higher airflow.

Measured in CFM (Cubic Feet Per Minute), airflow talks about the amount of air a PC fan delivers. And the higher a fan’s CFM, the more air it’s able to move to keep a computer system cool.

Looking at the CFM of the 120mm and 140mm, we were able to spot some differences and pick the more superior option.

The challenger, the 120mm fans, boasts a low CFM rating. But that isn’t a deal-breaker as these fans can keep PCs cool, giving users the liberty to multitask.

The next challenger, the 140mm fans boast higher CFM rating, which translates into better airflow to PCs. These fans can keep your computer cool during overclocking or under a heavy workload.

The high CFM rating gives the 140mm fans the ability to ensure better airflow to other parts of the computer, preventing PCs from overheating and developing a fault as a result.

On this comparison on Airflow, the 140mm case fans are the winners. They boast brilliant cooling ability and exhaust pressure.

Our Best Pick: The Corsair ML140 Premium Magnetic Levitation stood out for us. Airflow is 97 CFM, which is a reasonable rating to handle heavy workloads.

However, the Noctua 120 and 140mm fans boast similar CFM ratings and static pressures. Nevertheless, not all of them are similar. And there are other features that the latter has that set it apart. 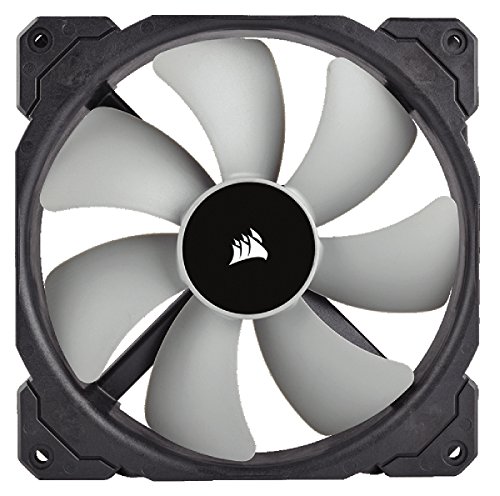 You can check out the Noctua 120mm case fans if you wish to. 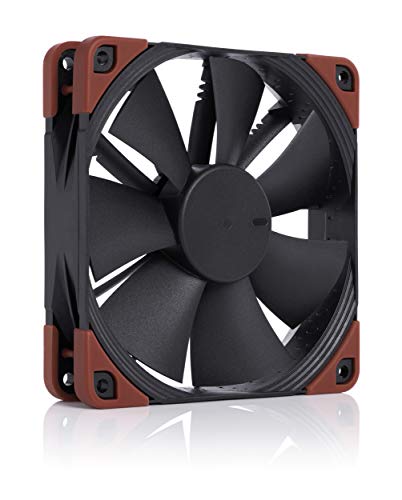 Spin speed, measured in RPM (Rotation Per Minute), is another crucial feature to consider when choosing a case fan. It talks about how fast a case fan can spin to dissipate heat and keep the system cool.

Comparing the spin speed of the 120mm and 140mm fans, notable differences were spotted.

Our first challenger, the 120mm case fans, boasts spin speed up to 1200 RPM. And this means it can spin super fast, dissipate high amount of heat to keep your system cool enough to run heavy applications smoothly.

With the 120mm spin speed rating, the PC would be highly responsive and deliver faster output. The higher spin speed is one of the reasons the 120mm fans can create positive pressure. And this enables keeping the dust particles and debris at bay, to some degree.

Our next challenger, the 140mm case fans boast spin speed up to 1000 RPM, which isn’t a deal-breaker. By the way, a fan spin speed of 800 RPM is acceptable. However, you need to ensure your fan runs as fast as it can to keep your CPU temperature down. Overheating can damage a PC.

Judging by the spin speeds, you can see that the 120mm fans are the winners. But keep in mind that the faster the spin speed, the shorter the fan’s lifespan. So, when choosing fans, choose one that has been tested for a prolonged duration at the highest speed. Most manufacturers have a reputation for conducting such tests.

Our Best Pick – The Uphere 3-Pack Long Life Computer 120mm Case Fan is our top choice, not because of its monstrous speed but its durability. This case fan will improve your PC’s efficiency. 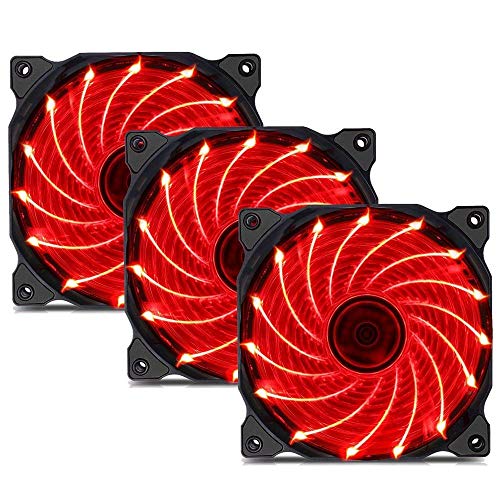 Noise level is another crucial feature to consider when choosing a case fan. It isn’t comfortable to work in a quiet environment with a computer that sounds like a washing machine.

When comparing the noise level (dB) of the 120mm and 140mm case fans, we were able to spot a winner.

The first challenger, the 120mm case fans, boasts low dB rating, despite its monstrous RPM rating. These fans don’t spin roughly, a reason they can deliver lesser sound pressure. The result is the same under light and heavy workload.

Going by the noise levels, (dB) majority of the 120mm and 140mm fans have, who are proud to announce to you that the 120mm has our respect. Their ultra-silent operation makes them the winner in the noise department.

Our Best Pick – With noise level at 17 dB, the Enermax Marathon 120mm Silent PC Fan is our top pick. This case fan boasts the ability to deliver ultra-silent operations under heavy workload, letting you feel comfortable while operating your PC. 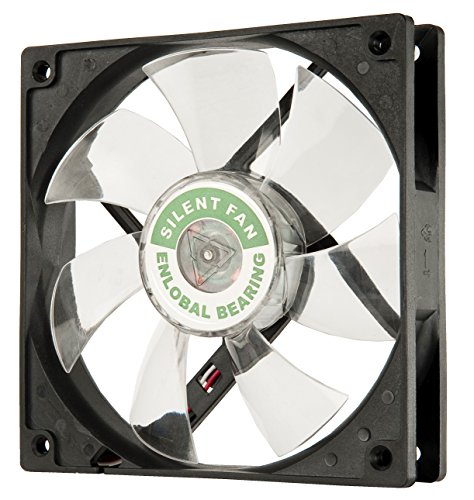 The price point is another area where we noticed some differences between the 120mm and 140mm fans.

The first challenger, the 120mm fan appears reasonably priced. This case fan offers impressive airflow, durability and quality at a competitive price, within $10 to $30.

The next challenger is the 140mm case fans, which are quite on the expensive side. But the price tag is justifiable, given their massive airflow and longevity.

The 140mm fan can improve PC performance, massively. They can prevent your computer system from overheating.

Going by the airflow rating and performance-related features, the 140mm case fans appear as the winner in the price department. The 140mm cost a little bit more than the 120mm fans, but for their performance, airflow and other features, their price tag is justified.

However, if you require a budget-friendly case fan that can cool your PC, the 120mm fans are a wise choice.

Our Best Pick – Our top pick for the 120mm fan is the ARCTIC P12 PWM. It offers great value for the money. 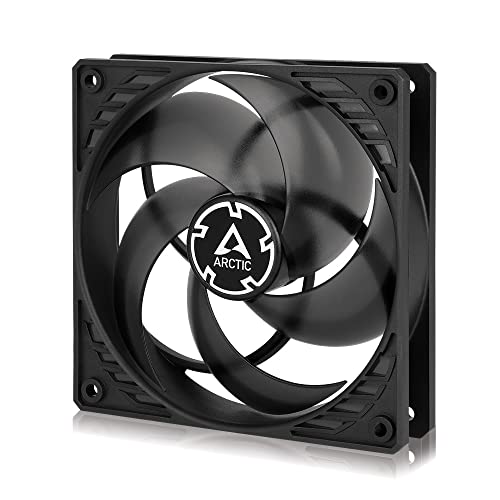 Our Best Pick – Among the 140mm fans, the Fractal Design Silent Series Blackout Edition Case Fan is a wise choice. 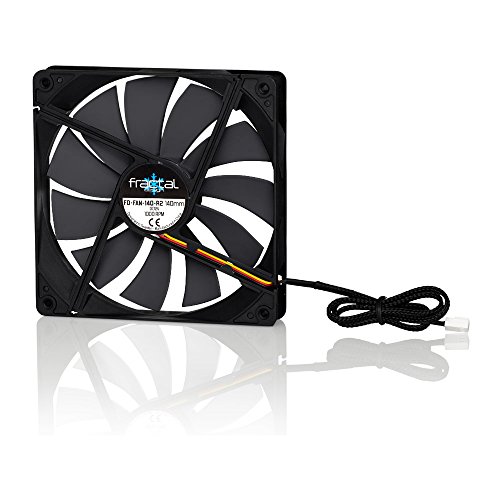 Final Note: Who Is The Winner?

As you can see, this 120mm vs 140mm fans comparison is a tight one. Both case fans are awesome products. However, it wouldn’t be fair to crown one of them the winner, given that they both perform great.

The 120mm fans are the standard fans in most PCs. They boast several impressive features, including noise levels many users would consider acceptable. However, the 140mm fans’ sleek performance makes it noteworthy. With better noise levels and airflow, the 140mm would be more superior.