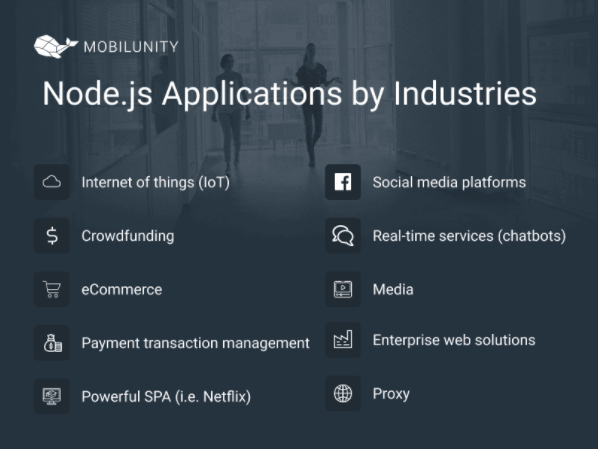 The launch of the initial version of Node.js was a significant game-changer, as developers can now use JavaScript to write server-side code and for internal applications. The full stack Node.js engineer profession is in high demand, which is unsurprising given that it is a universal solution for developing high-quality software. In the article, we will look closer at reasons to hire a Node.js engineer for your business.

Is There a Distinction Between a Node.js Engineer and a Developer?

Node.js developer is a specialist engaged in server-side software development. One can use the Node.js platform to manage code outside of the browser and develop server code for web pages and applications. This platform, in other words, is a backend technology for JavaScript.

There are ongoing disputes in the software development world regarding the difference between the specialists’ titles. There are two groups divided when defining the words like “developer” and “engineer.”

Some believe that a developer and an engineer are interchangeable concepts, while others consider them two different job titles, with distinctive principles and approaches to work. This confusion mainly arises since development is a relatively new field compared to engineering in the traditional sense.

Every day, more and more specific specialization titles emerge, each of which denotes certain aspects of the work, and the specialists themselves become increasingly confused in their roles.

We suggest considering two main approaches to the distinction of the developer’s and engineer’s specialties.

The first approach emphasizes the fundamental difference between the two positions and their primary responsibilities. An engineer is a specialist who has acquired competencies through a comprehensive technical education (for example, a Bachelor’s degree), and through this education, can apply scientific analytical methods in practice.

An engineer can undertake the developer’s functions, but his primary focus is planning, designing, and architecture production using scientific and engineering techniques. Developers, in turn, take a more creative approach to task implementation, focusing on one or more specialized areas, whereas engineers take a more holistic approach to issue solving. Developers are also professionals with a narrow specialization who work mainly with a particular programming language, framework, or platform.

The second approach is that job titles don’t signify much, and the lines between them are highly blurred. In a creative atmosphere, it’s often difficult to tell the difference between an engineer and a developer, especially where all available frameworks for programming languages and apps are used.

It all relies on the specialist and the meaning he ascribes to his professional title. Determining the significance of a position’s title is also essential during employment for a company since the terms “engineer” and “developer” are frequently synonymous. In our article, we will talk about these two concepts as interchangeable. 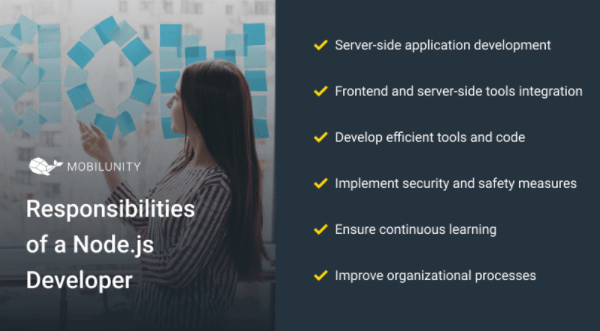 What Opportunities Will a Node.js Developer Offer?

We have chosen 5 reasons that can benefit you when choosing a Node.js developer:

Since Node.js is based on Google Chrome’s V8 engine, it can run and compile JavaScript at warp speeds. Chrome V8 transforms JavaScript code into faster machine code, resulting in improved Node.js performance.

The Event Loop is also one of the causes for rapid JavaScript execution. This functionality is independent of the Node.js developer and controls all asynchronous activities. Developers may handle more activities with fewer resources and memory by using the Event Loop. Node.js is ideal for developing scalable apps since it requires less code, fewer files, and fewer developers.

Trends suggest that current users want to engage with one another in real-time. A Node.js developer will assist you in developing real-time apps with an impressive user experience and excellent performance. Such applications may include games, chats, automated updates to social media pages, online store websites, or collaboration tools. Creating real-time apps may be challenging, as the scale of such projects is impressive. It is necessary to support solid and quick I/O, which a Node.js consultant can provide.

Node.js is ideal for working with data streams as it allows developers to process files as they load, which is a time-saving option. For example, you can encode audio or video files in real-time. Writable, Readable, Duplex and Transform are the four basic stream types provided by Node.js. They make I/O operations easier, utilize less memory when processing vast volumes of data, and work fast.

When using Node.js, the data between the server and client encoding is conveniently synchronized. It is possible since both sides use the same programming language – JavaScript. The usage of a single programming language assures code clarity and integrity while also saving time for developers.

Because Node.js has a substantial range of ready-made functional packages, a Node.js developer can quickly create a Minimum Viable Product. For business owners, this will mean saving money on product development and the chance to focus on building a business strategy. What’s more, the sooner the project receives the necessary adjustments and enters the market, the more benefits it will provide to the company.

Employers are trying to attract Node.js developers with competitive salaries, considering the high demand for such specialists. We have put up a table that shows the average full stack Node.js engineer cost. 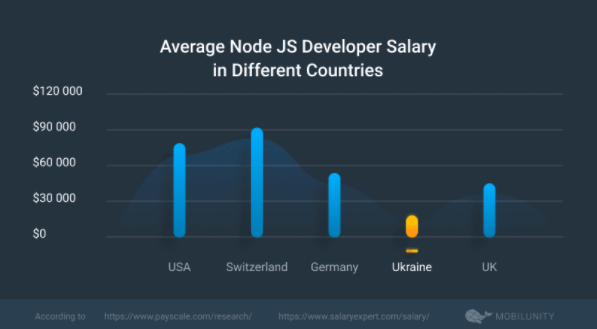 At this point, you probably have an idea of ​​Node.js and the capabilities that this platform offers. Because it plays such a significant part in modern technologies development, Node.js is an unquestionable opportunity for programmers and their employers.

The popularity of Node.js will only rise as a result of a large number of features it provides. Node.js offers a diverse set of tools, so we can confidently suggest it as a server solution for extensive, long-term projects.