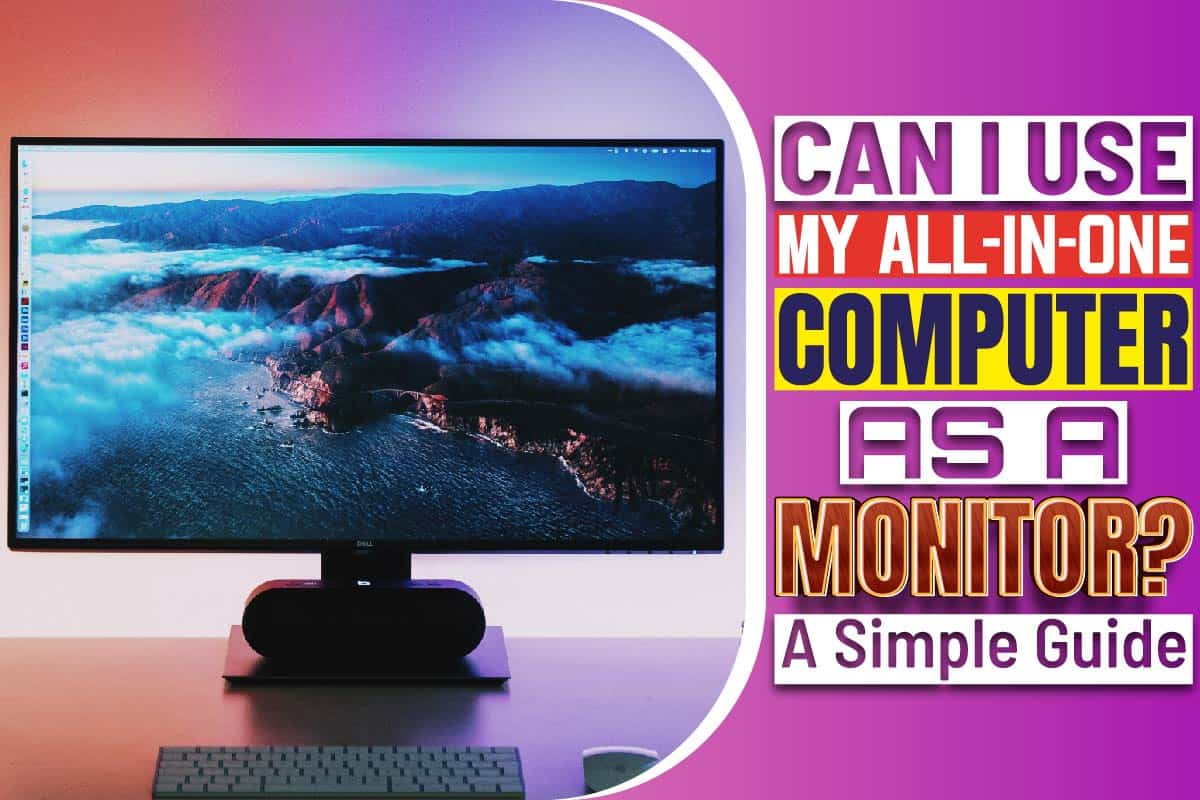 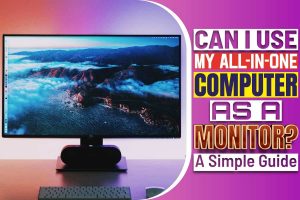 Your regular desktop computer has a monitor and a separate computer chassis. This chassis houses other components such as the motherboard and the hard drive.

A second monitor provides for more productivity and an expanded workspace. Since the monitor in an all-in-one computer is no longer a distinct unit, can you use it as a second display for another computer?

Can I Use My All-In-One Computer As A Monitor?

The answer depends on your AIO computer hardware. To use a computer as a monitor, it must have a display‘IN’ port. Most all-in-one computers only have display OUT ports. So, you can’t use them as monitors.

Some people suggest using software to mirror the screen content from the other display to your all-in-one computer. While this suggestion may work, the display is usually poor. In the end, it defeats the reason for using your computer as a monitor in the first place.

The USB adapters link to a USB port and allow for one or more external screens. Despite their lack of 3D support, they can run desktop software and play full-screen videos.

Touch displays, pads, solid-state storage, and random-access memory are all common features of all-in-one computers. Compared to traditional desktop computers, they have a smaller profile, are less congested, and have a more streamlined appearance.

Compared to regular desktop computers, all-in-one computers offer some advantages. They are regarded as user-friendly and easy to use, thanks in part to their huge touch-screen interfaces, in addition to conserving desk space and having fewer cords.

These types of computers also perform as good as, if not better than,laptops or other mobile computers.

Because of the free space in their storage cabinets, conventional desktop computers are bulkier. As an advantage, having more space makes it easier to access parts and replace them.

All-in-one computers have fierce competition in laptops. AIO computers may be more portable than desktop computers. Laptops are much better in this regard. As a result, laptops have become the standard choice for individuals and businesses.

The most significant limitation of all-in-one computers is that you cannot upgrade or modify their components. Damage to one component will require the replacement of the whole system.

How Can You Connect A Monitor To Your All-In-One Computer?

Many all-In-one models lack video ports and so are unable to connect to a second monitor. At best, AIO computers have an HDMI port as the only input port.

You’ll need a video cable to link a second monitor to your all-in-one computer. If your monitor’s inputs aren’t the same as those on your AIO PC, you’ll need an adapter to convert to the one compatible with your display.

If your all-in-one computer supports HDMI, DisplayPort, or Thunderbolt ports, and they happen to be compatible with the second monitor, then you’re good to go.

We recommend a high-speed HDMI male-male cable for best results if you’re using an HDMI to HDMI connection.

Once connected, you can use the all-in-one dual monitor set up in three ways: a duplicate screen, an extended screen, or a projector.

A duplicate screen will display the same information on all connected monitors, while an extended screen will combine all displays into one large screen.

Projector will display the information on the external display while disabling the built-in display.

These options are available in Display Settings on your Mac or Windows computers.

How To Troubleshoot An External Monitor

Sometimes, you can fix connect your external displays and still encounter blank displays, green or blurred displays. As frustrating as it can be, you can troubleshoot and find effective solutions.

An All-In-One Computers As A Gaming Console Monitor

All-In-One computers can serve as monitors for gaming consoles. Plug one end of a connection cable to your source device and the other end into the display port of your all-in-one computer. Depending on which connection your AIO computer supports, the cable could be an HDMI, DisplayPort or USB-C cable.

Some all-in-one computers will display the signal immediately. In other cases, you may need to hit the display source button. The display button may sometimes come with the general label“Input Switch” or something more specific as “HDMI.”

You can locate the source button at the back of your computer. If it’s not there, consult your manual for directions.

A desktop computer has various advantages over an all-in-one computer.

All-in-one computers share a similar architecture with laptops. While such architecture makes the all-in-one PC more compact, it also reduces the system’s overall performance. These components are unlikely to perform as well as a desktop benchmark.

All-in-one computers are speedy enough for basic functions. However, a regular desktop computer would be best for high-end gaming.

The lack of upgrade options is another issue with all-in-one computers. All-in-one systems are closed, unlike conventional desktop computer cases, which you can easily open to install and replace components. This design style often restricts system upgrades to simply memory upgrades.

Thanks to the emergence of high-speed external peripheral ports like USB 3.0 and Thunderbolt, internal upgrade possibilities are no longer as important as they once were. Still, they do matter for key components like the graphics processor.

Because many all-in-one computers use the components as laptops, they have a nearly equal performance level.

An all-in-one computer’s screen sizes maybe its only advantage over a laptop. Laptops remain confined to 17-inch and smaller screens, whereas all-in-one PCs frequently feature 20 to 27 inches screens.

All-in-one systems were once cheaper than laptops, but technological advancements have almost reversed this trend. Many laptop computers cost under $500; the average all-in-one computer now costs at least $750.

Things To Consider Before Purchasing An All-In-One Computer

You should think about a few things before buying an all-in-one PC. You should purchase a computer that can suit you for both work and entertainment.

An all-in-one computer is much easier to set up than a traditional desktop computer. Depending on the brand you choose, some computers come with removable supports that you can use to fix your computer quickly.

An AIO computer is a better cost-effective option than a desktop computer.

You’ll need to buy each component separately if you want to set up a workstation, including the monitor, speaker, CPU, keyboard, and mouse. However, with an all-in-one computer, you already have a complete workstation.

Because most AIO computers weigh less than 10 kg, they’re more portable than a traditional desktop computer.

You can move them without stress in case you want to rearrange your room or office.

In conclusion, all-in-one computers combine all the components of a traditional desktop computer in one unit, except the keyboard or mouse.

Many all-in-one computers do not have display out ports, so you cannot use them as monitors for another computer.

However, you can connect or extend a second monitor using HDMI, Thunderbolt or DisplayPort connections. If your second monitor does not have compatible ports, you can use an adapter and an appropriate video cable.

All-in-one computers are a more portable and cost-effective option than desktop computers, and they can sometimes provide equal or even better performance.