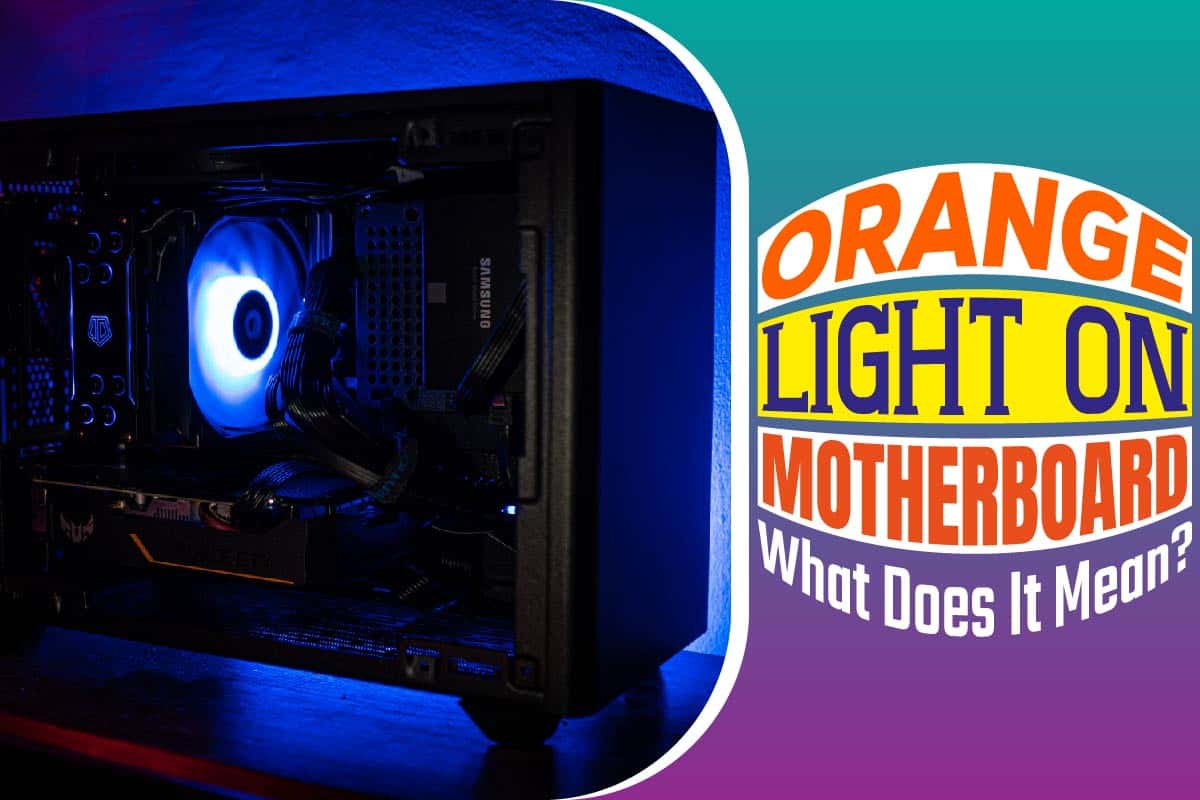 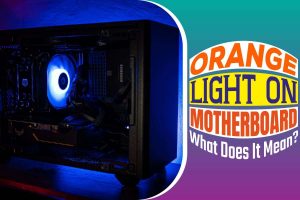 Electronic devices always have a way of informing us of a potential problem with their function. These signals usually come with either sounds or lights indicators.

We can all agree that the motherboard is central to a computer’s function. So when it gives off strange light like an orange light, we should be worried. However, the best approach always remains to troubleshoot, identify, or isolate the problem and resolve it.

Orange lights on your motherboard are a signal for various issues. Understanding what the lights mean is the first step to resolving the problem.

Orange Light On Motherboard – What Does It Mean?

Orange lights on the motherboard could signal different things. However, the nature of the light can help us identify the problem. The implication of orange light on the motherboard depends on the blinking pattern and duration. Does it stay static, or does it keep blinking?

A solid orange light is an indication of a possible problem with either the memory or the motherboard. On the other hand, a blinking orange light means there’s probably a problem with your computer’s power supply. So, how can you fix these problems? Continue reading.

How To Fix Orange Light On Motherboard

Most times, when there’s a blinking orange light on your motherboard, your PSU fan may not also be spinning at the same time. Begin by checking the power supply unit to ensure that you have the correct voltage supply.

If you use an ATX or mATX power supply unit, you can check this using a gems clip. First, locate the green wire from the PSU’s 24-pin socket and insert one end of the wire into it.

In another instance, the PSU fan may be spinning, but the system refuses to boot. Where this happens, verify the individual voltage using a multimeter to ensure that the PSU supplies power. Also, double-check the processor’s EPS power connector for loose connection.

There could be multiple causes for this, so you must correctly diagnose the system. In most cases, it could be related to either a memory or a motherboard problem. First, disconnect all the cords attached to the system’s components like the hard drives and optical drives.

Then, connect the power connectors to the motherboard and turn on your device. If your computer works fine, try connecting each device one at a time to narrow down the source of the issue.

A motherboard is a circuit board that connects the various components of a computer. It includes connections for CPU, RAM, and expansion cards. It also allows the CPU to access these components and control them.

How Does The Motherboard Work?

The motherboard’s primary function is to house the computer’s microprocessor chip and allow it to communicate with other components. Everything that runs or improves the computer’s performance is either part of the motherboard or connects to it via a slot or port.

When you turn on your computer, a switch-mode power supply powers the motherboard. It then sends data to appropriate input and output devices via buses. Now, let’s understand how each component in the motherboard works.

Different Components In The Motherboard

The CPU sockets connect the CPU to the motherboard via metal connectors that link to metallic pins. These metallic connections power the CPU and carry data to and from the computer’s components. Different motherboards come with varying socket connections of socket and different processor pin layouts.

The motherboard provides one more slot for the installation of RAM modules. These slots usually lie next to the CPU sockets. Random Access Memory (RAM) is temporary storage used by computers to store program code and open files.

Computers’ internal storage devices include hard drives, optical drives, and floppy disks. Each of these devices has a data-transfer cable that connects it to the motherboard. A motherboard has at least two storage device connectors, allowing you to expand your computer’s storage capacity if needed.

A bus is a circuit that connects two parts of a motherboard. We can measure bus speed in megahertz (MHz), which refers to how much data transfer can take place across the bus at once. A faster bus can transfer more data at once, thereby accelerating calculations.

You’d find the expansion slots in most computers aligned with the back of the computer chassis. Expansion cards provide connections for interfacing with external devices.

Expansion card slots on a motherboard allow you to upgrade or add new components to your computer. An example is the video card that performs the calculations required to run 3D games and creates the images displayed on the monitor.

Functions Of The Motherboard

What Are The Signs Of A Faulty Motherboard?

If your motherboard is wrong, it will either fail right away or give you warning indications. Once you’ve identified some of these problems, taking preventative measures like backing up your information will save you stress.

Here are a few standard visible techniques to tell if a motherboard is bad.

Another indication of a failing motherboard is computer freezing. Sometimes, this can suddenly occur while you’re working on your computer. Note that not all freezes are due to the motherboard; software issues can also be responsible. However, if the freezing becomes too regular, then your motherboard may be faulty.

This usually appears when there are hardware issues. There could be other causes. However, you can search the error code on Google to know whether the BSOD issue relates to the motherboard. If it persists despite troubleshooting, the motherboard may be faulty.

A bad motherboard will detect connected hardware connected. Most of your PC’s peripherals connections will not appear, including your flash drive, mouse, and keyboard. Although this could be hardware, it could also be a sign of a failing motherboard.

A failing motherboard usually gives off beeping sounds as warning signals. If your computer is unable to boot, listen carefully for the PC’s beep sequence.

If the pattern precedes a 3, 4, or 5, it is an indication that the motherboard is deteriorating. Note, however, that beep patterns vary with different motherboard models.

Sometimes, your computer can still boot successfully, even with a faulty motherboard. However, your computer’s software may begin to misbehave. The reason is that a failing motherboard has limited capacity to manage hardware components. Consequently, running programs will encounter frequent slowdowns and lag times.

Should You Upgrade Your Motherboard?

Your computer’s motherboard is an indispensable part of your system. Although replacing the motherboard can be costly, it can provide you with benefits in performance, hardware support, and improved graphics.

Upgrading your computer’s motherboard offers a faster CPU, faster data transfer, and a better graphics card. However, keep in mind that motherboards connect to RAM, CPUs, and other components. Thus, compatibility is critical when changing your motherboard.

The nature of orange light on a motherboard will give us some insight into understanding the problem. For example, a blinking orange light indicates a possible problem with the power supply unit. You can solve this problem by either fixing or replacing your power supply.

On the other hand, a static orange light could signal a problem with either the memory or the motherboard itself. Therefore, you should first isolate the components and identify the problem before taking any further steps.

Beeping sounds, freezes, and the dreaded Blue Screen of Death are a few signs of a failing motherboard.