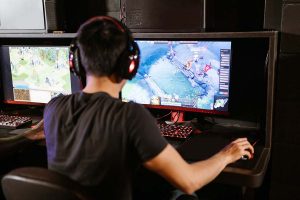 Does that answer the question?

Of course not. In fact, the answer has nothing to do with the games being Japanese beyond the fact that, generally speaking, the archetypal JRPGs were first made in Japan while the first of what we’ll call Wester RPGs (WRPGs) were developed in the USA.

Chances are you’ve heard of both JRPGs and WRPGs, but if you’re a relatively casual western gamer you may have only played a western RPG. But for simplicity’s sake lets get an example on the table quick: Pokémon can be seen as a JRPG while Skyrim is historically one of the most popular WRPGs.

Now that you have a foundation to work with: let’s take a look at some of the defining features of a JRPG, and how they differentiate themselves from what we know as a WRPG.

Both JRPGs and WRPGs are long-form games which tell sprawling stories, but it’s how you interact with the world that makes them immediately discernible.

While many reduce JRPGs to using turn-based combat, as in Dragon Quest or Pokémon, the genre can also encompass strategy/tactical turn-based games and action RPGs, such as Monster Hunter or Dark Souls. Underneath these different types of gameplay, JRPGs place great importance on stats—requiring players to level up, obtain better gear and upgrade equipment in order to hit higher numbers against their opponents.

This focus on growth results in one of the most polarising mainstays of the JRPG: grinding. Of course, the act of repeatedly completing mundane activities is not isolated to the JRPG, but it is most certainly a common trait.

In contrast WRPGs tend to focus on first or third person live-action gameplay which focuses less on solely upgrading numbers, and more on hard realism. You need to only a look at Read Dead Redemption or Skyrim for a platitude of examples in this regard.

The stories that the two types of RPGs typically tell are almost complete opposites.

JRPGs generally provide players with a colourful protagonist which they then take control of as they play through a (more or less) predefined narrative. Within this narrative you’re likely to encounter a larger party who pad out the varying personas of the narrative and provide aid along your way.

This focus on pre-defined storytelling can lead to incredibly satisfying and complete narratives in JRPGs—which is why, to this day, the JRPG genre is one known to have many of gaming’s best narratives.

Conversely, WRPGs tend to provide players with a blank slate of a player—either one that you can create, choose or one who can be heavily customised. With this character, players can then make active decisions to sway the direction of the storytelling, often towards morally “good” or “evil” endings.

By providing players with plentiful choice and customisation, WRPGs provide the grounds for replayability in order to gain access to content which was missed in a first playthrough.

This divide between pre-determined and player-focused gameplay types have drawn the attention of many scholars and analysts suggesting that such narrative positionings perhaps reflect the different ideologies between East and West. But these are questions for another day.

The style of worldbuilding varies greatly between WRPGs and JRPGs, mainly in line with other narrative traditions of imagining worlds within particular cultures.

WRPGs often centre themselves within clearly identifiable influences: fantasy settings akin to The Lord of the Rings or Dungeons and Dragons or sci-fi settings akin to Star Wars or Star Trek. Within these world systems of hierarchy, race, establishment and society tend to relate directly to historical structures found in Western history or literature. In such a way, these worlds tend to base themselves in hard realism, allowing players to believe that these worlds could exist in some alternative reality.

JRPGs on the other hand don’t have such strong foundational influences, beyond the aesthetic style denoted by Japanese popular culture and anime. This allows JRPGs to more easily step between setting—be it future, past, present or some merging of all three (as is often the case). JRPGs also place a greater importance on back stories of people, worlds and places compared to WRPG’s importance placed on believability. This allows games like Nier Automata to feel congruous even though you are fighting archaic robots in a past/future between deserts, carnivals and overgrown slums.

JRPGs are often quite polarising for western audiences who are turned-off by turn-based combat, find the worlds depicted too unbelievable, or simply don’t like the anime styling. However, before anyone can write off the genre for good, they must realise that the JRPG no longer only consists of games from Japan. From South Park and the Stick of Truth to Child of Light and Lord of the Rings: The Third Age, JRPGs are a gaming genre in their own right—and thus are being produced and enjoyed by individuals from all over the world.

So, if you’re yet to truly give a JRPG a go, why not pick up one and give the iconic genre a go. After all, one of the greatest reasons so many turn away from JRPGs is because they expect a similar to experience to a WRPG—maybe knowing that the experience will be totally different will help you enjoy your next one!

Get ahead in your favourite online titles with ElDorado.gg. There you can get your hands on in-game currency, fancy items, high-level FFXIV accounts and some time-saving boosting. If you’re looking to fast-track your journey to the top of your favourite title, you know where to head.