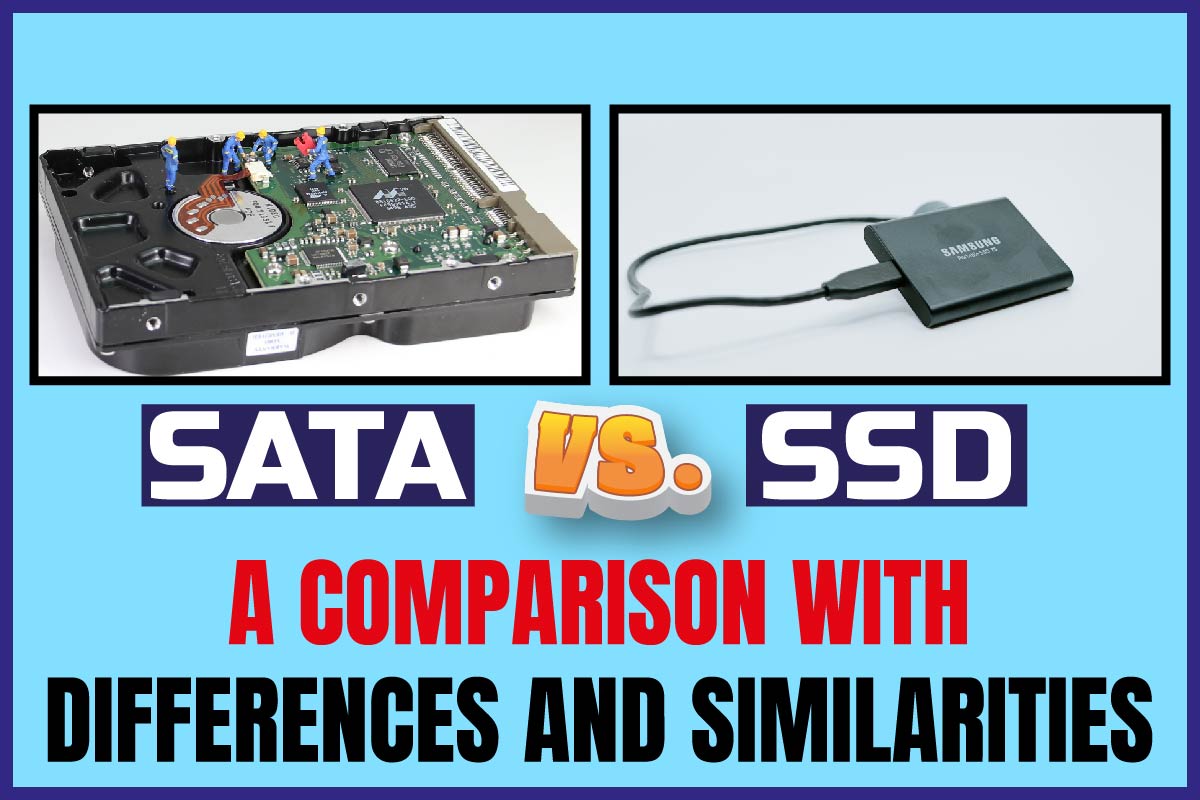 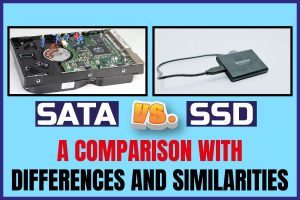 Computers are a marvel of the modern age. They have revolutionized the development of human civilization and have sped up the process quite a bit. With the development of contemporary society, these artificial processing beasts have evolved as well. So, you will need a larger storage capacity to withstand processes.

And when choosing between SATA and SSD storage, we face indecision because each storage option has its perks and problems. That’s why we have created this SATA vs SSD comparison guide, which points out their similarities and differences. So, without waiting longer, let’s jump in, shall we?

Modern Drives In A Nutshell

Modern-day computers might have learned how to think on their own through Artificial Intelligence, but it all started with a bunch of 1s and 0s, which are codes.

And these codes always needed to be put in some drive; with the Main Memory only saving things temporarily, we needed a permanent solution, which was the hard drive.

But, as time moved on and the processes became heavier and needed to be faster, we improved the drives, leading to SATA drives. And then, at one point, the hard drive business was completely revolutionized with the introduction of the Solid-State Drive or SSD.

Now people are torn between these two options, and as we move on, we’ll see which drive you should be choosing for yourself in the long run. In the next section, we’ll see how each drive works before moving on to the comparison.

The Serial Advanced Technology Attachment or SATA drive was first introduced in 2003 and has conquered the market for more than a decade since then. In the decade of the 2000s, this was the go-to storage solution for every PC builder, and at the same time, processors were built to be optimized with these drives.

SATA drives have an interface speed of 6 Gb/s and a throughput of 600 MB/s. And with all this power, they can store from 500 GB up to 16 TB. Moreover, thanks to all the new kinds of drives out now, SATA Drives come very cheap.

Compared to SATA drives, SSDs are an upgrade but an expensive one. Unlike the SATA drives, there are no moving parts in SSDs. In these drives, the data is transferred through non-volatile flash memory. So, since there is no need for any parts to move, the drive works a lot faster than a SATA mechanical drive.

Now, let’s come down to the storage that it holds. An SSD can hold from 120 GB to 2 TB, but it will cost you 2-4 times the cost of a SATA hard drive. But that expense is worth it if you’re someone who needs really fast processing thanks to your work or if you need lower loading times on your gaming rig.

SATA Vs SSD: A Comparison With Differences And Similarities

Now that you know the basics about SATA drives and SSDs, we’ll get down to our comparison now. So, here goes:

Speed of the Drive

Firstly, you need to think about the speed. This is a very important factor while choosing a drive for your computer because it will impact your work on a primary level. The main work of a computer is to complete processes and to speed it up and save up some time, you need fast file transfer, where an SSD will work best.

But, if you are an average user, who doesn’t carry out heavy processes on a computer, then a SATA should do the trick for you. You’ll get a good amount of storage at a very low price. But if you get an SSD here, then you’ll end up wasting its potential, which would definitely be a financial loss for you.

So, in the case of speed, SSDs are way faster than SATA drives, but that doesn’t mean you should buy one. Check your work and see if it needs high speed. If it doesn’t, and you’re on a tight budget, then SATA drives would be a better choice for you.

Secondly, storage will be an issue. But just like speed, it totally depends on your purpose of use. In the case of storage, SATA drives come ahead since they can provide from 500 GB to 16 TB, which is impressive. On the other hand, SSDs only have 120 GB to 2 GB of storage which brings limits users by quite a margin.

So, if you need to save a lot of files or work with big files at a stretch, then a SATA would be perfect for you. However, at the same time, if you are okay with compromising storage for speed, then you can also choose SSDs as your go-to drive. But, there’s also one other thing that people do which you can consider.

To fight this problem, a lot of people would equip their workstations with both SATA and SSDs, the first one for storage and the latter for speed. So, you can always come up with ways to solve this problem if you consult with experts. Hence, try to weigh in your options before you decide on this.

The Lifespan of the Drive

Fourthly, it would be best if you looked at how long the drive will last you. So, to understand this comparison, you need to know how these drives are built and how they work.

Now, the main difference between a SATA drive and an SSD is that that the SATA is mechanical, and the SSD is non-mechanical, which means it doesn’t need moving parts.

A SATA drive has moving parts in it, such as discs and tape. Now, due to this, the parts face mechanical wear and tear, which eventually brings down their longevity. Since the parts inside move, they are more likely to stop working.

On the other hand, data is channeled through an SSD through flash memory which is not volatile. So, there is no movement in an SSD. The data transfers through the chips set onto the whole structure. Hence, it’s less likely to stop working, which means a longer lifespan.

To put it all into numbers, an SSD will last you ten years or more, while a SATA hard drive will last you three to five years. An SSD would be a long-term solution for the expense, but a SATA will functional for a shorter period, in comparison.

Now, there’s one more thing that you should keep in mind, which is, with time, you will need to upgrade your computer a lot. So, make a timeline of how long each upgrade cycle will match your hard drive’s lifespan with that because you might end up needing more storage in the future.

Fourthly, you should be looking at how durable and reliable your hard drive is. There are a number of aspects that work here. In case of reliability and durability, both SATA and SSDs are strong in their own right. And in the case of SATA hard drives, they are supposed to be safe against physical impact thanks to their steel casing.

But they are actually more prone to damage thanks to their mechanical properties. If a SATA hard drive faces a physical impact, then it’s more likely to stop working due to the mechanical parts inside. But SSDs are enclosed in steel cases, except M.2 SSDs, which have a structure similar to that of a RAM stick.

So, they can withstand more impact since there are no mechanical parts inside. Therefore, in most cases, you’ll find that SSDs are more durable and reliable than SATA hard drives.

The Noise of the Unit

Last but not least, on our SATA vs SSD comparison, we are concerned about how much noise a hard drive will make. SATA hard drives have moving parts in them, and these parts will make a sound when they transfer data. But SSDs don’t require any movement. So, SSDs don’t make sound at all.

And that brings us to the end of this article. We hope that our SATA vs SSD comparison guide was of use to you and actually made a difference in helping you make the right decision. Now, a lot of this decision depends on the kind of work that you want to accomplish with the storage drive that you choose. So, keep that in mind.

Other than that, if you feel like we could have added something more to this article to make it better and enhance the experience, feel free to leave some feedback. Good luck!